Please I repeat please help keep this website going by making a small donation in support of Leo’s work through Paypal: https://www.paypal.me/LeoZagami

In the last few weeks one of Latin America’s most prosperous and politically stable countries has been rocked by protests and looting.  During the protests several people have died, and thousands have been injured and arrested, but the left-wing Antifa-style demonstrators have shown their true Satanic identity to the world yesterday, when they destroyed a church and burned statues of Jesus in the street. This long-running protest was initially triggered by a rise in the Santiago Metro’s subway fare and the increased cost of living in the Jesuit-controlled country.

Some say it is not a coincidence that the accidents started soon after the death of the enormously influential local Jesuit José Aldunate, a charismatic member of the Society of Jesus who is best known for being a human rights activist during the military dictatorship of Augusto Pinochet, and was the Provincial of the Jesuits in Chile. José Aldunate, who died of natural causes on September 29th, was awarded the National Prize for Human Rights in 2016.

However, in a count made last year by the Chilean National prosecutor’s office, some 221 Catholic priests and 8 Catholic bishops have been put under investigation up and down the country on charges of sexual abuse and cover-up, all due to allegations made from the year 2000 – 2018. Such scandals gave plenty of ammunition to the Antifa insurgents who are opposing Sebastián Piñera, the first center-right presidentto hold office since the departure of Augusto Pinochet in 1990. 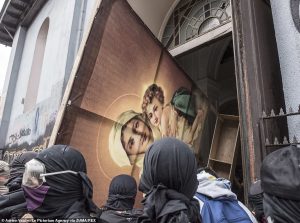 In response to the widespread protests that broke out across Chile in October 2019, Piñera declared a state of emergency authorizing the deployment of Chilean Armed forces across the main regions to enforce order and prevent the destruction of public property, but yesterday thousands of people gathered in Santiago’s Plaza Italia that has been used for three weeks as the main site of the mass protests, and unleashed hell when a group of Antifa-style hooded protestors dressed in black began to loot a church in the area known as La Asuncion. They were photographed dragging church pews, statues of Jesus, religious canvases, images of the Virgin Mary, and other iconography out through the doors of the historic building before setting them on fire in an act of pure evil against the Catholic Faithful who watched in disbelief.

Many of the demonstrations over the past 22 days began relatively peaceful, but are now becoming increasingly violent,  an ominous warning for those of us who know that Antifa and the likes might act in the same way here in the U.S. if given the same opportunity in the near future. 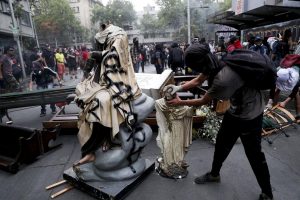 Contrary to what people might think, dictator Sebastián Piñera is not a friend or a fan of President Donald J. Trump, as he is a firm supporter of the Climate Change Agenda and was supposed to host the Santiago Climate Change Conference (COP 25) with special guest Greta Thunberg, which has been now relocated to Spain due to the protests.

Piñera is also a close friend of former president Barack Obama and back in June 2013, while visiting President Obama in the White House, he said, “I’m going to sit at the President of the United States’ desk,” breaking the White House’s political protocol, and when Alfredo Moreno Charme, Minister of Foreign Affairs, said in shock “How many other presidents have done the same?”Obama responded, “This is the only one,”causing laughter between those present.

Sorry I cannot use Patreon due to my current non citizen status so I am stuck with Paypal for those kind enough to support me: https://www.paypal.me/LeoZagami

Leo Zagami is a regular contributor to Infowars and the author of the new groundbreaking book  Confessions of an Illuminati Vol. 6.66 The Age of Cyber Satan, Artificial Intelligence, and Robotics

OUT NOW ON KINDLE:

Leo Zagami is also the author of  Confessions of an Illuminati Volume 5: The Decline of the West and the Rise of Satanism in our Society

OUT NOW ON KINDLE: https://www.amazon.com/dp/B07BQVQ9ZM/ref=tsm_1_fb_lk

The Gilchrist Experience Discussion of the Harlem Vaccine Forum

Molecular mimicry: Body Confusion of “Self” and “Non-Self” (More Evidence on HPV Vaccines and Autoimmunity)