As CHAZ, the Capitol Hill Autonomous Zone, continues to develop on the international stage, a timeline has been established tracking the major events of CHAZ, though it neglects to include important historical landmarks catalogued by National File.

According to CHAZ.zone, the website is “a hub for information and resources about the Capitol Hill Autonomous Zone (CHAZ), established the evening of June 8, 2020 in the midst of the George Floyd protests in the Capitol Hill neighborhood.

The site claims that it “aims to track its history and ongoing developments.”

Such “history and ongoing developments” include natural landmarks of civilized society, including “Screening of Ava DuVernay’s documentary ’13th,’” which happened on June 9 at 10:30 p.m., “recycling collection begins” on June 10, and “Christian proselytizers cause disruption in 11th/Pine plaza” occurring at 6:20 p.m. on June 11. 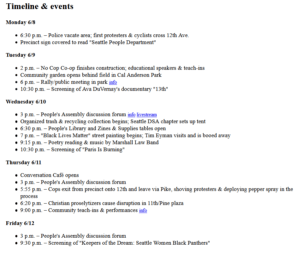 However, the timeline seems to paint a rosy picture of CHAZ, as it neglects to mention the nation’s struggle to form coherent law enforcement after ejecting the Seattle police department.

On June 9, a rapper-turned-warlord known as Raz Simone established a private police force in CHAZ, declaring as much in a video that shows Simone beating a man for spraying over someone else’s graffiti and then taking the man’s cell phone as tribute.

On June 11, the Seattle police chief confirmed the existence of reports of extortion and a protection racket within CHAZ, suggesting Simone’s enforcers are being paid for their security services.

Then, on June 12, National File reported that police say 911 calls reporting sexual and violent crimes within CHAZ’s borders have tripled, though police are naturally unable to enter the autonomous zone to respond to these calls.

The timeline also neglects to catalog the alleged theft of CHAZ’s food supply at the hands of homeless people they invited to join their autonomous zone, nor does it note that the autonomous zone’s first leader apparently stepped down after admitting to being a “serial abuser.”

However, the timeline make mention of the founding of CHAZ’s community garden, featuring a small amount of topsoil sprinkled over cardboard and a variety of lettuce, tomato, and marigold plants to see to the nutritional needs of the autonomous zone’s citizens.