Facebook has made it clear to Pastor Rich Penkoski and his team at Warriors for Christ that if there were to try to reestablish a presence on Facebook, they would be removed immediately.

Speaking to National File, Penoski said nothing that his Facebook page was reported for violated the terms of service laid out by executives of Facebook, but rather was the result of targeted harassment campaigns, or “raids.”

Penkoski and the Warriors for Christ say they are one of many Christian organizations that receive online “raids” from LGBT and other groups, and receive unfair treatment from Facebook when users threaten the lives of members of the group, or any other direct hate speech violation.

Penkoski says that, despite being banned by Facebook, the abuse he and his family sustained on the platform resulted in doxxing of the private information.

“We were trolled. We were harassed. We had death threats,” says Penkoski. “I mean it was coming in so fast that we couldn’t even keep up with it.”

In 2017, Penkoski and Warriors for Christ took a stand against the use of the LGBT flag rainbow reaction used by Facebook for Gay Pride Month, and received push back from the LGBT community, including major celebrities.

Even George Takei took a swing at Warriors for Christ for asking their followers to refrain from the use of the new LGBT reaction on their groups.

Who wants to go rainbow bomb this page? https://t.co/KQtqdT0cOC

Warriors for Christ claims Facebook punished them for religious iconography to opposition of same sex marriage, and that Facebook ignored any reports made by Warriors for Christ about hate speech hurled toward their organization or its members, as well as death threats and doxxing campaigns.

Facebook initially limited the distribution of any Facebook groups and pages affiliated Warriors for Christ. This eventually escalated to posts being moved and members of the group being temporarily banned, before Facebook eventually told them they were at risk of being totally banned from the platform.

By the time they reached 30,000 likes Facebook limited their distribution which happened again when their next group reached only 20,000likes. 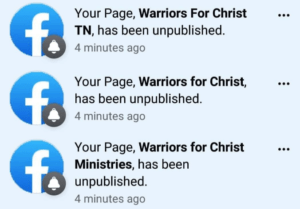 Warriors for Christ, as a traveling ministry, says they have been successful with outreach at pride parades and abortion clinics. Warriors for Christ also provides communities with information obtained using Freedom of Information Act requests showing the amount of tax money spent to hold and hire security for Drag Queen Story Time events at public libraries.

Lawyer Taking on CPS In California Is Murdered

Demented Dems Declare Impeachment Is On Par With Revolutionary War, Fight Against Slavery and Battle Against Nazis