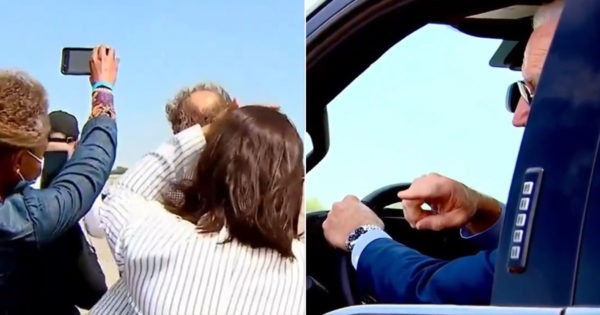 During Joe Biden’s visit to a Ford Rouge Electric Vehicle Center in Dearborn, Michigan on Tuesday, he engaged in a bizarre interaction with the press corps which saw him joking about crushing the reporter under Ford’s new all-electric pickup, before driving away as the gaggle of reporters collectively burst into shrill giggles.

The press fawned over Biden as he sat behind the wheel of the Ford truck, asking softball questions about how it felt to drive a nice truck. One reporter eventually broke the streak of easy questions by asking the president about the current conflict between Israel and Palestine.

“Mr. President, can I ask you a quick question on Israel before you drive away, since it’s so important?” the reporter asked.

“No you can’t,” Biden shot back. “Not unless you get in front of the car as I step on it. I’m only teasing.” He then peeled away from the crowd of onlookers as the press corps serenaded him with hysterical high-pitched laughter and applause.

After Biden jokes about running over a reporter trying to ask him about Israel, many reporters start laughing; he then peels off and the press corps breaks into hysterical laughter pic.twitter.com/7pVn5vqMpI

Biden’s visit to the motor plant received much fawning coverage from the corporate media, in contrast to President Trump who generated outrage among the press for praising the founder of the Ford Motor Company in 2020:

The extreme-left user base that comprises Twitter has descended into full outrage meltdown mode after President Donald Trump made positive remarks about the late automotive pioneer Henry Ford at the Ford Rawsonville Motor Plant on Thursday.

“Every one of the workers in this project volunteered to take part in the greatest industrialization and mobilization project that our society has done, the American people have done in our life times,” President Trump stated, before adding, “the company founded by a man named Henry Ford, good bloodlines, good bloodlines, if you believe in that stuff, you got good blood.”

The President’s praise of Ford, a white male industrialist and philanthropist of considerable historical repute who was instrumental in the development of mass automobile production, assembly lines, and worker compensation, sent shockwaves through the neoliberal Twitter community Thursday.

POLICE: Kenosha Man Jacob Blake Had Weapon On Car Floorboard Before Being Shot