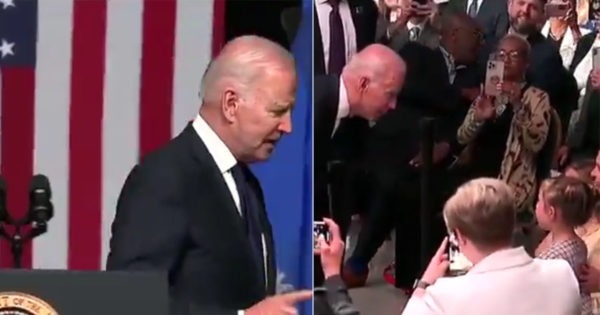 Video footage shows President Joe Biden wandering away from the podium while giving a speech so he could bend down and talk to two small girls sitting by the stage. After conversing with the children for a few moments, Biden returned to the dais to reveal that he promised they would receive “ice cream” after the event was over.

In the footage, Biden announces “And I gotta make one check-in” before shuffling away from the lectern and down to the spectators below, where he engages in lively conversation with two small children seated next to  their mother.

Though the majority of the conversation is unintelligible, Biden can be heard telling one of the girls “Mommy owes you some ice cream,” eliciting raucous laughter from the crowd. The President then turns and marches back up to the podium, where he announces, “I just had to make sure the two girls got ice cream when this is over.”

Pres. Biden greets children in Tulsa: “I just had to make sure the two girls got ice cream when this is over.” pic.twitter.com/D5AN66j1NZ

During a speech last week, Biden halted his monologue to look at a young female audience member, and compliment her appearance and remark on her age:

President Joe Biden told the child daughter of a veteran that he loved the barrettes in her hair and that she “looks like she’s 19 years old sitting there like a little lady with her legs crossed” during a speech in Virginia on Friday, maintaining eye contact with the girl throughout the stream of compliments.

“I’m especially honored to share the stage with Britney, and Jared [unintelligible] Nathan and Margaret Catherine,” Biden said, turning to stare at a girl off-camera. “I love those barrettes in your hair, man. I’ll tell you what, look at her she looks like she’s 19 years old sitting there like a little lady with her legs crossed.” Biden then trailed off into a chuckle.

Biden’s penchant for associating children with ice cream also surfaced last week, when he explained how George Floyd’s 7-year-old daughter sat on his lap while he offered her ice cream:

Joe Biden revealed that George Floyd’s 7-year-old daughter, Gianna, threw her arms around him, hugged him, and asked to sit in his lap. Biden then provided her snacks, including ice cream, and said Jill Biden “would kill” him if she knew.

While discussing his interactions with the family of George Floyd, the deceased fentanyl user who died in police custody after attempting to pass a fake bill one year ago today, he revealed that Floyd’s 7-year-old daughter, Gianna, “threw her arms around me, gave me a big hug — and wanted to sit in my lap.” He added that she then announced she was hungry and asked Biden for snacks. “My wife would kill me — we gave her some ice cream, she had some Cheetos, and I think she had some chocolate milk,” before revealing he could not remember the another snacks provided to the 7-year-old.

REPORT: Cardi B, Of ‘Wet Ass P-Word’ Fame, Files For Divorce After Her Husband Cheats On Her

COULTER: Republicans Are Doing Nothing to Distinguish Themselves From Democrats